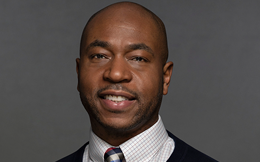 Theodore “Ted” R. Johnson is a senior fellow and Director of the Fellows Program at the Brennan Center for Justice. In this role, he explores the intersection of race, politics and public policy outcomes. He also leads the fellows program and the complementary research it contributes to the organization’s core mission of reforming the nation’s systems of democracy and justice. Prior to joining the Brennan Center, Dr. Johnson was a research manager at Deloitte and a national fellow at New America.

From 1994 – 2016 Johnson was a career military officer whose service included stints as a speechwriter to the Chairman of the Joint Chiefs of Staff and as a White House Fellow during the Obama administration.

His work on race and politics has appeared in The New York Times Magazine, The Washington Post, The Atlantic and other national publications. He is the author of the forthcoming book When the Stars Begin to Fall (Spring 2021), which explores how national solidarity can help overcome the effects of racism.

Dr. Johnson holds a B.S. in mathematics from Hampton University, an A.L.M. with a concentration in International Relations from Harvard University, and a Doctorate of Law and Policy from Northeastern University.

The Politics of Race and Racism

This session will examine structural racism and representation of the black electorate in the 2020 elections. Moderated by Julia Azari