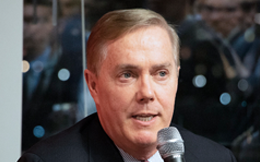 Steve Scully is C-SPAN’s Senior Executive Producer/ Political Editor/ Primary host. He is responsible for coordinating all aspects of C-SPAN’s campaign programming for C-SPAN, C-SPAN.org and C-SPAN Radio (now heard on XM/ Sirius.) In addition, he manages a team of field producers responsible for the editorial coverage of The White House, politics and special projects. He has managed election coverage for every presidential race since 1992, overseeing C-SPAN’s “Road to the White House” programming and developing media partnerships with CNN, NBC and the Associated Press.

Elected by his peers from the White House press corps, he is the former president of the White House Correspondents’ Association (2006-07.) He has interviewed every U.S. President since Gerald Ford, as well as leading world leaders.

Before coming to C-SPAN, Steve covered business, politics and local government as a reporter and anchor at WHEC-TV (NBC Affiliate) in Rochester, N.Y. Prior to that, he was an anchor and reporter at WSEE-TV in Erie, PA and WHBF-TV (CBS Affiliates) in Rock Island, Illinois. Steve taught several courses on the media & politics at St. John Fisher College & Nazareth College in Rochester, NY between 1988-90. While attending college, he served as an intern in the office of Delaware Sen. Joseph R. Biden, and later a staff assistant in Sen. Edward M. Kennedy’s communication office.

Steve Scully sits on several national civic boards, including the CJ Foundation for SIDS and First Candle, both devoted to the prevention of sudden infant death syndrome.

He also serves on the board of the Jefferson Educational Society, a think tank in Erie, Pennsylvania designed to bring the best & the brightest ideas to the Northwestern Pennsylvania community.

In 2015 Cable Fax Magazine listed him as one of Cable’s 100 “Heavy Hitters”. New York Newsday listed Scully, along with CBS’s Bob Schieffer as one of the media’s most influential movers and shakers in political programming. C-SPAN’s campaign coverage earned the network an Emmy, Peabody and Cable’s Golden Ace Award, the industry’s highest honor. In May 2019, the Pennsylvania Association of Broadcasters inducted him into the Television Hall of Fame.