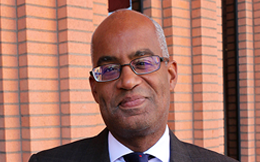 Ron Christie is Founder and CEO of Christie Strategies LLC, a full-service communications and issues management firm in Washington, D.C. He is also the author of several books including: Acting White: The Curious History of a Racial Slur, Blackwards: How Black Leadership Is Returning America to the Days of Separate But Equal, and Black in the White House.

Christie, a veteran senior advisor of both the White House and the Congress, brings years of government relations experience. Most recently, Christie served as Vice President of Navigators LLC – a full service strategic consulting and communications firm. He also has served as Executive Vice President and Director of Global Government Affairs at Ruder Finn and Of Counsel at the DC law firm of Patton Boggs, LLP. From 2002 to 2004, he was Acting Director of USA Freedom Corps and special assistant to President George W. Bush. He began service at the White House in 2001 as deputy assistant to Vice President Cheney for domestic policy, advising the Vice President on policy initiatives in health care, budget, tax and other policy areas. Prior to joining the Vice President’s staff, he briefly served as counsel to U.S. Senator George Allen (R-VA). He also served as senior advisor to former House Budget Committee Chairman John Kasich (R-OH) from 1992 – 1999.

Active in international affairs, he was elected as a term member to the Council on Foreign Relations in 2001, a distinguished group devoted to promoting improved understanding of international affairs through the free exchange of ideas. While serving in the White House, Christie was asked by President Bush to lead an American delegation to an international conference on volunteerism and civic engagement hosted by then Prime Minister Tony Blair in London, England. Subsequent to the volunteerism summit, Christie worked with then Chancellor of the Exchequer Gordon Brown to devise an expanded call for civic engagement in Great Britain.

As a frequent commentator on current political events, he has appeared as a political/legal analyst on The Situation Room with Wolf Blitzer, Lou Dobbs Tonight, Hardball with Chris Matthews, Fox News Sunday, Hannity & Colmes, The O’Reilly Factor, and The Tavis Smiley Show. Christie also serves as a weekly Contributor and Panelist on National Public Radio’s “Tell Me More” program. A noted political strategist and skilled orator, Christie is a contributing columnist for The Hill, a leading Capitol Hill newspaper, and is one of their featured writers on “The Pundit’s Blog.”

The Politics of Race and Racism

This session will examine structural racism and representation of the black electorate in the 2020 elections. Moderated by Julia Azari