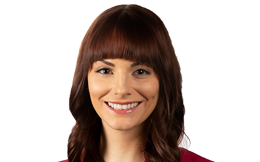 Melanie Zanona is a congressional reporter and author of the Huddle newsletter at POLITICO, where she covers the inner workings of Capitol Hill. She has written extensively about the relationship between President Donald Trump and the GOP, internal leadership battles and behind-the-scenes policy and personality fights in Congress.

Prior to joining Politico, Melanie wrote for a trio of Capitol Hill publications: she was a staff reporter for The Hill, a policy and legislative action reporter for Congressional Quarterly and a reporting fellow at Roll Call.

In 2019, Melanie won a Dateline Award from the Society of Professional Journalists for her work on a series titled, “How the Trump tax law passed.”

Melanie is a Chicago native and University of Illinois graduate. In her spare time, she likes to cook Italian food, play with her boxer named Bodie and root for her favorite Chicago sports teams. Melanie and her husband live in Washington, D.C.

This session will explore the election outcomes, the agenda for the 117th Congress, and the future interaction of the new Congress with the new President.